- April 26, 2019
This build is a TON of fun to play, so I don't see myself abandoning it completely anytime soon even though I've already started my next 2 builds.

Patch 3.6 saw massive buffs to Fireball and added special increased-area nodes to the passive tree for staff casters. This saboteur takes advantage of these buffs and a Sire of Shards to lay waste to an area multiple screens across with a sea of gigantic, overlapping fireball explosions. 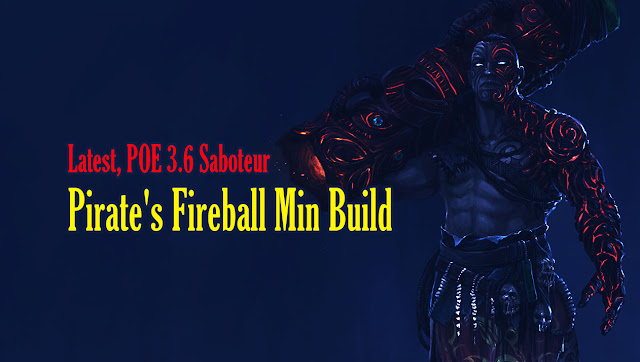 Pros & Cons:
+ Fantastic mapper on a budget and great league starter. I was quickly and easily farming maps up to T13 entirely on self-found gear and didn't even 6-link my Sire of Shards until I went after Shaper.
+ Incredibly potent at Breach, Delve, Incursion, and Betrayal mechanics. Anything in a confined space with you simply stops existing.
+ Total immunity to reflect, because of remote mines. The only map mod you should avoid is zero-regeneration, which is more of an annoyance than anything else.
+ Extremely beginner and console player friendly! This build cannot be aimed, so not having good twitch skills is a total non-issue.
+ Very tanky! Probably even HC viable with minor changes.
+ SSF viable! You can farm your own Sire of Shards as early as act 3  and effortlessly sends Uberlab Izaro scurrying back down his elevator.
+ Tremendous Meme Factor and a lot of fun to play
- Annoys the crap out of party members and guildmates.
- The total lack of precision makes this a terrible uberlab farmer. Good luck getting extra keys out of Izaro when your mines are instantly killing portals, essences, gargoyles, and lieutenants from anywhere in the arena.
- Can become difficult or impossible to see your screen with MTX.
- Reliant on Flame Dash for movement and dodging.
- Reliant on regeneration for sustain.
- Not a Juggernaut or Occultist.

Ascendancy:
Pyromaniac, Bomb Specialist, and Demo Specialist are your first three labs, after which you have a choice to make. For a tankier build, Born in the Shadows is one of the best defensive options in the entire game.

Bandits:
Help Alira for a life/MOM build, or kill all if you go the energy shield alternative route.

Pantheons:
Major: Lunaris for mapping and ordinary content, Brine King for Uber Elder pays off much more.
Minor: Garukhan for mapping, but the attack speed debuff from Gruthkul is better for tough bosses.