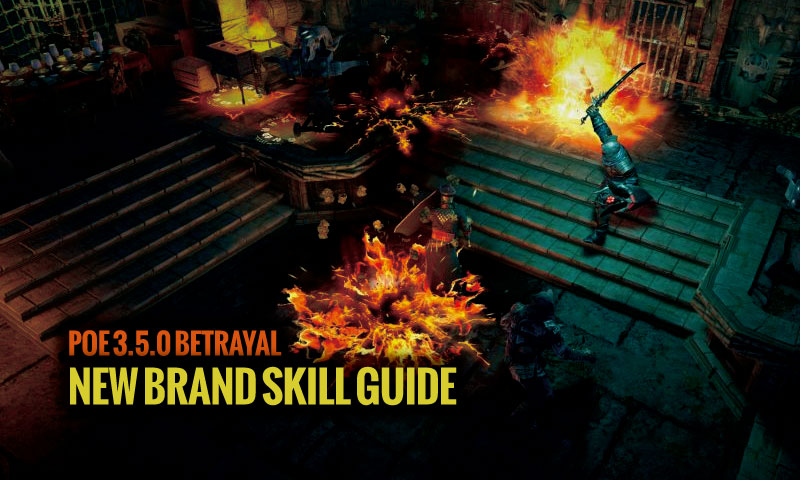 Armageddon Brand binds to a nearby enemy when placed, and summons flaming meteors above them that come crashing down, damaging enemies in an area. It naturally applies powerful Ignite effects. As with other brands, it returns to an inactive state when the Branded enemy dies, and will reattach if another enemy enters its range.

Armageddon Brand has a longer activation time than Storm Brand, which can be modified by new Brand passives as well as Cast Time modifiers, but its placement time is much shorter, making it quick to deploy multiple Armageddon Brands.

Path of Exile is also introducing a new Brand Recall skill, an instant cast ability that pulls all of your Brands to your location, extends their duration and activates their effects instantly. This means you don't need to keep re-casting Brands as you move, and it increases their damage output as you can quickly trigger the activation delay. After being Recalled, Brands have increased attachment radius, letting them jump to further enemies.


Unlike other skill gems, Brand Recall only has 6 levels, but each level greatly increases cooldown recovery speed. This makes the skill great with modifiers that increase gem level, letting you Recall much more often.

Path of Exile is adding a number of new effects to the passive tree; a new Keystone, a new notable for the Hierophant, and a number of new nodes spread throughout the Templar and Witch area of the Passive Tree. These all have a variety of effects that enhance your Brand's damage, activation speed, and attachment range, as well as increasing the maximum number of brands that you can have active.