For Beginner's Guide, Ready For the Arrival of Path of Exile 3.7

- May 16, 2019
First of all, English is not my native language, so the content of this article, if there is something wrong, I hope the reader can understand. As an old player who has played Path of Exile for three years, he has a certain understanding of playing Path of Exile. Many new players have encountered a lot of problems with the Path of Exile RPG. Here, I will write a beginner Base Guide for the upcoming Path of Exile 3.7 season.

In the 1600s of the permanent calendar, because of a mistake in Oriath, he took the boat of exile and was transported to the death site of wraeclast to become an exile. 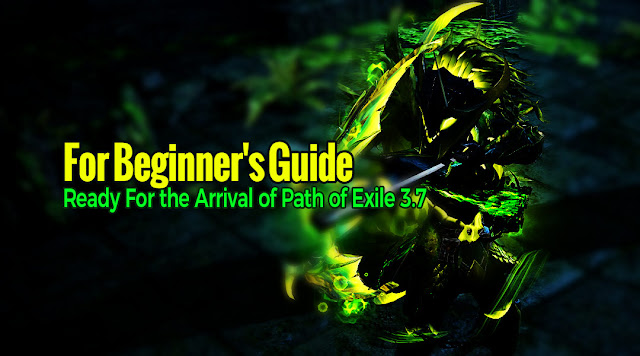 Leagues Guide:
There are currently two permanent alliances, Standard and Hardcore. At the same time, there will be two challenging alliances, mostly three or four months. The Challenge Alliance provides a new gaming environment for exiles, including the warehouse will be completely new, and the role part must also start to upgrade.

Warehouse:
You can use the warehouse to exchange items for different characters, but you must be in the same league. There are 4 warehouses by default.

Role limit:
Each account is pre-configured with 24 character fields.


Going Ashore:
Sudden storms struck the boat of exile. When you woke up, you were already on the shore. There was only one wooden stick beside you, and an injured person was lying on the rock. I grabbed the stick and asked if the injured person needed help. Suddenly the body next to me climbed up and attacked us. After killing the living corpse, a shining gem was dropped, picked up and placed on the wooden stick.


Items:
Weapons, Equipment, and Jewels have item rarity, which is normal, magic, and rare unique.
Normal items and magic are generally not picked up, because even if the store can get a very low rate of return, and the rare must be identified by the


Task:
Refer to the main line task process to solve the task and upgrade, each upgrade will get the talent points, the task will also give some, the talent part of the proposed offensive and defensive halfway, you can refer to the other players' talents first, the novice recommends blood volume At the beginning of the defense, the energy shield must wait until later equipment to become a more effective defense.

The difficulty of the game is divided into three levels, ordinary, cruel, and ruthless. The part of the mission is also solved three times. In cruel difficulty -20% resistance, ruthless is -60% resistance.

As a novice, both blood volume and resistance must be considered at the same time, and survival can be hurt.


Earn Currency:
Start with the store recipe, remember that the three-color connection can sell

Chromatic Orb, and the six-slot can sell 7x

Starting at level 60, vacate a warehouse to place the entire set of certified or unidentified equipment, and sell the merchant directly to

Except for the first week of opening service, most of the premiums below 60 are mostly worthless, except for

The unique luxury that is difficult to achieve in the middle of the league will be the main selling point.

At the end of the league, rare items with high-order affixes are the main selling points.

Learn to use the market to sell and buy items.

Take The Ledge as an example. In addition to the must-have monsters, the quick trip to The Ledge is about 5, The Ledge is 6, etc. When you upgrade to level 10 here, you will have an experience penalty of 90%. It is time to leave.

Avoid areas that are not well practiced. Some areas will cause lost or dead roads. They are not suitable for practice. They should go directly to the next area where they practice well.

Play a large group at a time, avoiding a single monster or a rare monster that cannot be killed quickly. For example, at The Ledge, you should quickly pass some monsters, let the monsters gather again and clear them, and continue to move forward to bring the remaining monsters to the next wave of monsters.

Keep going, when you upgrade, you should keep going forward, a little kite, some monsters, when it is big enough, clear it once, or wait for a little while processing items and talents at the same time. Only solve the mainline task and the branch task that can get the talent points


Item picking
Currency, Scroll of Wisdom can be used after a fixed amount, rare items, when the body is full, throw away the most space-consuming items, pick up formulas that can directly sell currency

Take two bottles of  Quicksilver Flask, use a kite to kite a group of monsters, once in the clear light, use the potion to the next group