PoE 3.7 Legion is the name of Path of Exile 3.7 Expansion & Challenge League! In the Path of Exile Legion, we'll discover armies trapped in the Domain of Timeless Battle, fated to war for all eternity. We'll be able to free these soldiers of five legions, give them mercy and take their sweet loots. 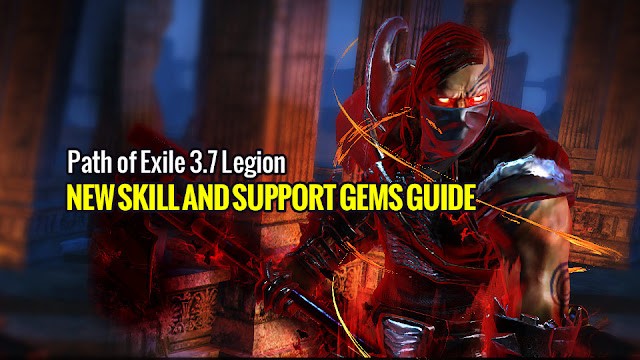 Today, we focus on New Skill and Support Gems Guide in the 3.7 new seasons:

2. Bladestorm
The new Bladestorm skill performs a spinning attack, damaging enemies around you. It also creates a spinning storm that hits nearby enemies for a portion of your weapon damage at a rate based on your attack time. You can have multiple storms active at once, letting you cover a small area in storms to continuously damage foes.


3. Blood and Sand
Two new reservation effects let you switch between blood and sand stances. New and reworked skills have different behavior in each stance, like bladestorm, which causes bleeding bloodestorm in blood stance, and blinding sandstorms in sand stance.

Characters start in Blood Stance, but by using one of the new reservation skills, you'll be able to switch back and forth between Blood and Sand Stance instantly. A low-level skill, Blood, and Sand reserve 10% of your mana, and while you're in Blood Stance you will deal more area damage with melee skills but have less area of effect. Sand Stance grants more area of effect with melee skills but you will deal less area damage. Repeatedly using the skill instantly switches stances.


5. Dash (unfinished gem description)
Dash and steelskin let you instantly respond to dangerous enemy attacks by avoiding them or protecting you from damage.


6. Flesh and Stone
The second reservation skill, Flesh, and Stone reserve 25% of your mana to create a zone around you. In Blood Stance, nearby enemies are maimed, which also increases the Physical damage they take. In Sand Stance, nearby enemies are blinded, and you take less damage from enemies that aren't nearby. As with Blood and Sand, using the skill instantly switches between the stances. Both of these skills share a short cooldown.


7. Steelskin (unfinished gem description)
In PoE 3.7 a new skill has been introduced, Steelskin, which will somewhat replace the old Molten Shell skill for early levels. Molten Shell, however, has been reworked to be more useful against bosses. More armour changes have occurred but the specifics are still unknown.

Unknown Rage Skills
Two new attack skills will let you easily generate rage, a stacking buff that gives powerful attack bonuses and no longer has a downside. The berserk skill will let you consume this rage for massive bonuses. A new aura and support gems will further enhance this melee playstyle.