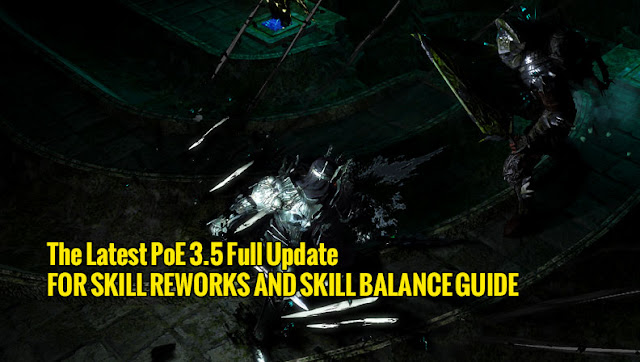 The Following is PoE 3.5 Full Update For Skill Reworks and Skill Balance Guide, I hope to help everyone.

Arctic Breath
- No longer a ground-projectile. It is now capable of passing over gaps and cliffs.
- No longer leaves a trail of Chilled Ground in its wake.
- Now leaves a chilling area on the impact that deals cold damage over time over its duration. This area will move towards enemies.
- You can now target specific locations with this skill. The projectile will impact at the location if it does not collide with something sooner.
- Now requires level 28.

Whirling Blades
- Now uses weapon attack time +0.6 seconds, rather than overriding your base attack time. While base weapon speed will have some effect, this change is intended to reduce the travel speed difference between characters using weapons local attack speed modifiers and characters who are not.

Leap Slam
- Now uses weapon attack time +0.55 seconds, rather than overriding your base attack time. While base weapon speed will have some effect, this change is intended to reduce the travel speed difference between characters using weapons local attack speed modifiers and characters who are not.

Herald of Purity
- Minions summoned by this skill now deal more Physical Damage based on gem level, rather than more Damage.

Herald of Agony
- The Agony Crawler summoned by this skill now deals increased Physical Damage per Virulence you have, rather than increased Damage.

The updated content of Path of Exile Betrayal above, rewritten by Ezokay, hopes to help players. If you want to see more content, you can visit the official Path of Exile website, https://www.pathofexile.com.