- February 27, 2019
Welcome to our Path of Exile Synthesis New Holy-Themed Spells Guide, we will list all the New PoE 3.6 Spells. GGG games have stated they plan to make unique more useful for opening up even more ways to builds classes in the game. so expect some good 3.6 New Reveals and New Spells to shake up the build meta in PoE.Raiders Guide For Beginner. 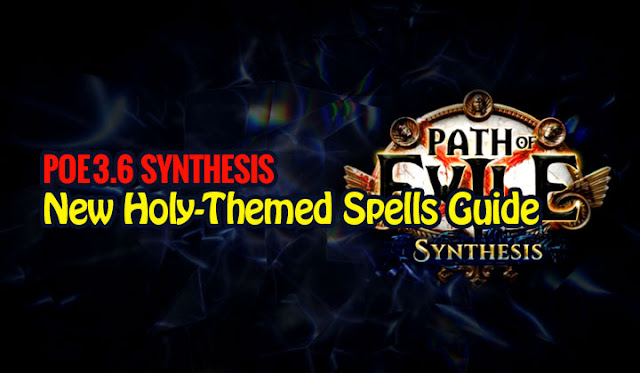 Now, take a look at PoE 3.6 New Holy-Themed Spells.Alongside Path of Exile: Synthesis, we're adding a number of new holy-themed spells. These include Purifying Flame, Wave of Conviction, and Divine Ire. Today's news reveals more about these skills and their place in Path of Exile.

All holy-themed skills are distinguished by dealing physical damage with a portion always converted to Fire or Lightning, or in the case of Wave of Conviction, both. This gives these skills some unique interactions with other aspects of the game, especially with the new Physical and Elemental passives found near the Templar area of the passive tree.


Purifying Flame
Purifying Flame is a physical and fire spell that is accessible to you at level one. When cast, it sends a wave that, when it arrives at the enemy, deals damage in a circle around it and consecrates the ground. The spell then sends out a damaging shockwave that affects enemies in a large area on any consecrated ground. This does two things: finishes off surviving enemies from your previous Purifying Flame casts and creates interesting interactions with other sources of Consecrated Ground. Interactions to consider are the Inquisitor or Sulphur Flask's ability to Consecrate an area to allow Purifying Flame to damage multiple areas with a single cast.

Wave of Conviction
Wave of Conviction is a new Level 16 skill that sends out a cone of force that deals physical damage with a conversion of 25% to fire and 25% to lightning to every enemy in the area the wave impacts. The wave lasts for a duration, which means that both area of effect modifiers and duration modifiers influence the total area the wave can reach. However, casting the skill again ends the current wave after a short time. This means that you can choose to cast the skill infrequently to hit a large area, or frequently to get more damage but less effective range before the duration ends.

Wave of Conviction also applies Fire, Lightning, or Cold Exposure to enemies, reducing their resistances. This debuff is applied based on the highest elemental damage type the skill does. This means that if you convert the physical damage to Lightning Damage, it'll always apply Lightning Exposure, granting -25% Lightning Resistance to enemies hit. This boosts the skill's own damage with repeated use, but also lets it function as a utility skill for casting on tough enemies alongside any other elemental spell.

Skills that Reduce Resistances
We've standardised a few other skills that reduce resistances. Frost Bomb now applies -25% Cold Exposure instead of its resistance being part of the Frost Bomb debuff. Scorching Ray now applies -25% Fire Exposure when reaching eight stages on enemies. This change was made to give you a choice in how your elemental build reduces enemy resistances, rather than providing more options that can be combined to reduce resistances to unreasonably low levels. We'll provide more options for sources of Fire, Lightning and Cold Exposure in the future.

Divine Ire
Divine Ire is a Level 28 channelled skill that damages a few nearby enemies while charging up power and then unleashing in a sudden deadly beam. It deals physical damage with 50% converted to lightning. It gains additional stages for each enemy zapped, with a chance to gain an extra stage from Normal and Magic enemies. It always gains an additional stage against Rare and Unique enemies. This lets you charge and unleash the beam rapidly if you position yourself well. The beam reaches maximum width at 10 stages, and maximum damage at 20 stages.