- June 04, 2019
POE 3.7.0 will be released soon, and the Path of Exile official website has released the first wave of POE 3.7 updates. Let's take a look at New Content and Features updated Guide in POE 3.7. 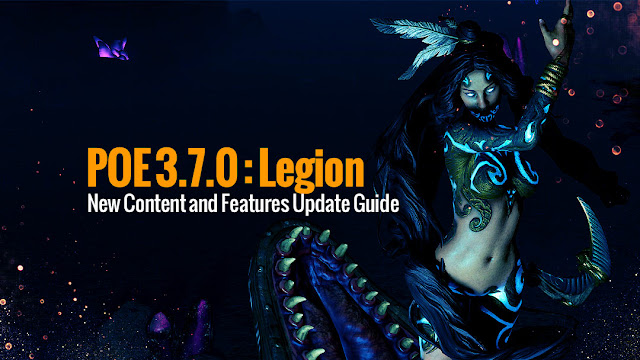 - Added a new Dexterity Skill Gem - Dash: Performs a series of quick teleports towards a targeted location. If using the "Attack in Place" option, the direction is reversed.

- Added a new Strength Skill Gem - Berserk: Consumes your Rage at an accelerating rate. While active, grants more damage, attack speed, movement speed, and causes you to take less damage. Requires 5 Rage to use, cannot be stopped once active, and only stops when all Rage is consumed.

- Added a new Intelligence Skill Gem - Frost link: Deal cold damage in an area around your location, leaving chilled ground around you, then teleport to a targeted location. Has a cooldown that is reduced based on the number of nearby enemies when cast.

- Added a new Dexterity Skill Gem - Precision: Casts an aura that reserves a portion of your mana, and grants you and nearby allies accuracy and increased critical strike chance.

- Added a new Strength Skill Gem - Pride: Casts an aura that reserves a portion of your mana, and causes nearby enemies to take more physical damage, increasing the damage they take the longer they are affected by the aura.

- Added a new Strength/Dexterity Skill Gem - Perforate: Strike the ground with your weapon, causing spears to strike out from the earth. These spears strike your target location multiple times while in Blood Stance, and strike outwards in a large radius from the target location while in Sand Stance. Requires a sword or axe.

- Added a new Strength Skill Gem - Chain Hook: Attacks nearby enemies with a damaging shockwave. If used at a distance, releases a chain that draws you closer to any enemy hit. Generates 1 Rage when you hit an enemy. Requires a one-handed sword, mace or axe.
- Added a new Strength Support Gem - Pulverise: Supports melee attacks, causing them to deal more damage and with a greater area of effect, but with slower attack speed.
- Added a new Strength Support Gem - Rage: Supports melee attacks, causing you to gain 1 Rage when you hit an enemy with a supported skill, with a short exclusion timer on Rage gain from the support. Supported skills deal added physical damage based on your Rage, adding a significant amount of physical damage if your Rage is above a threshold.
- Added a new Dexterity/Strength Support Gem - Impale: Supports attack skills, granting them a chance to Impale enemies, increases the effect of Impales caused by those attacks, and causes those attacks to deal more physical damage.

- Added a new Strength Support Gem - Shockwave: Supports melee skills. Triggers a Shockwave skill on a kill that deals attack damage in an area around the slain enemy. Restricts the use of supported skills to maces and staves. There was a miscommunication regarding the number of weapon-specific support gems when discussed on Baeclast earlier, and for that, we apologize.

- Added a new Dexterity/Strength Support Gem - Close Combat: Supports melee attacks, causing them to deal more damage to enemies based on their proximity. Also, causes supported skills to grant a buff on hit, which increases attack and cast speed for the next travel skill you use. Restricts the use of supported skills to axes and swords. There was a miscommunication regarding the number of weapon-specific support gems when discussed on Baeclast earlier, and for that, we apologize.

- Added 12 new Unique Items, one of which was designed by a supporter.

- Added 18 new Sextant modifiers, many of which only appear on high-tier maps.

- Reworked 15 existing Unique Items, which will only drop from monsters in the Legion challenge leagues.

- Added 15 new keystones to the Passive Skill Tree, visible only when you have one of the new unique jewels introduced in Legion socketed.


- Improved the early-game experience. Fights in the first three Acts will be tougher but more responsive, involved and dynamic. This includes fights against basic monsters!

- You can now queue skills. By using one skill while another skill is in progress, that skill will be used immediately after the current skill has finished.

- Added new functionality to the Map Stash Tab which displays which tiers and maps have Elder or Shaper influence, or an Atlas Objective.

- Rage is now displayed along the top-left of the Mana orb, so you can see exactly how much Rage you have at any given time.

- Added sounds for various error cases, such as attempting to equip an invalid item.

- Smoothed the transition between resolutions while Dynamic Resolution is enabled.

- Changes to the size of characters now occur smoothly, rather than snapping between the two sizes.

- Improved the localization of server messages.

- Continued to incrementally improve the sound, art, effects, and environments.