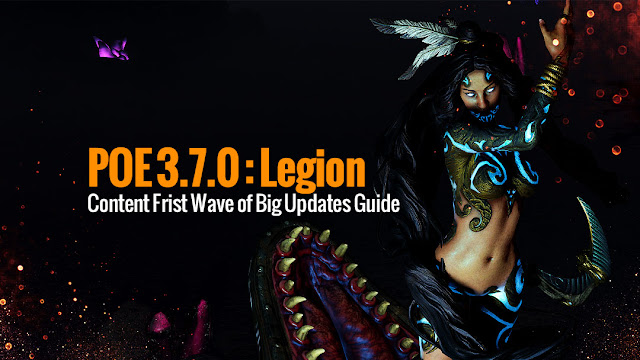 - Challenge leagues are a great opportunity for a fresh start in a new economy. All of your old characters and items are still present in the Standard and Hardcore leagues, but you're encouraged to join the new leagues, complete challenges and demonstrate your mastery of Path of Exile!

- In the Legion Challenge League, you will encounter monoliths as you journey across Wraeclast. Touching one of these monoliths will reveal ancient armies frozen in the midst of battle.

- Shatter the magical bonds that keep these warriors locked in time, but do so quickly, because the monolith's revealing effects are brief. When the effect ends, the soldiers you released will continue their battle, and even turn their violent attention to you. Defeating these soldiers in combat will earn you great rewards and, if you're lucky, splinters you may later use to access the Domain of Timeless Conflict.

- By combining your splinters into Emblems, and placing two or more Emblems in the map device, you can visit the Domain of Timeless Conflict. Here you will witness and battle the armies whose Emblems you have used, and even their powerful Generals.

- Discover powerful new jewels that drastically alter your Passive Skill Tree from each of the 5 legions, as well as new Unique items, and a brand new type of item: Incubators. Incubators can be applied to any equipment and will remain there until you've slain enough monsters to reveal what lies inside. There are many different kinds of Incubator to find!

- With 3.7.0, there are Standard, Hardcore and Solo Self-Found variations of the Legion challenge league available. They have the same core mechanics and items. You can create private league versions of these leagues, with mods that make the game harder.

- From the 19th challenge onwards and for every third challenge after that, you will receive pieces of the Legion Totem Pole decoration to display in your hideout. The Totem Pole permanently showcases how many of the Legion challenges you completed during the league.

The following are some of the most important updates in POE 3.7