- April 09, 2019
Herald of Agony is a herald skill gem. When activated it reserves mana and grants a buff that gives a chance to inflict poison on enemies, if the enemy is successfully poisoned the character gains Virulence and an Agony Crawler minion. 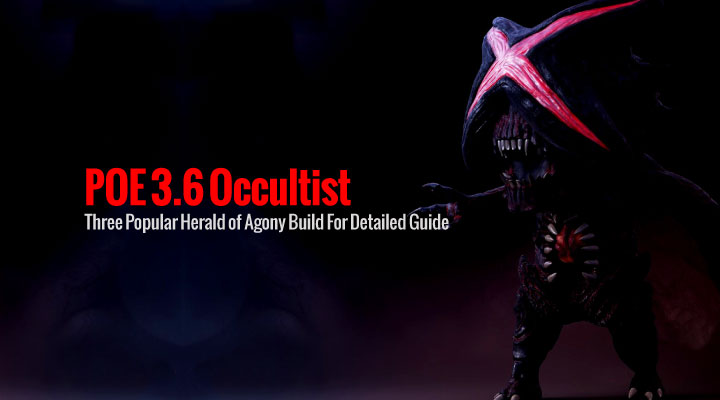 The following three Occultist Builds are the best and most practical ones I think, and I hope to help you.

This build is very flexible. There's a lot of room for variation and these are not necessarily perfect or ideal tree and gear setups so if you don't like some aspect of it, just tweak it.

This isn't a super expensive build by nature. I have spent multiple exalts on acquiring my gear because I've been really focused on trying to get high clear speed in end game content. The build relies primarily on gem and tree interactions so you don't strictly need any specific gear.

So basically the cost is what you're willing to invest in it to make it tankier and clear faster as these are the main attributes that improve with better gear. You could even successfully run this build in SSF if you wanted.

Pros & Cons:
- 180%+ peak increased move speed.
- Super curses. Mobs barely dent you with the super enfeeble and temporal chains.
- 7k+ life.
- Easy to maintain fortify.
- Strong recovery via LGoH.
- Agony Crawer does all the work.
- Can handle EVERY map mod in the game
- Good clear speed via minion augmented profane bloom explosions. Very fast in delves.
- Good league starter. The base gear is dirt cheap and no six links are required.
- ??? dps. Feels like about 300-500k with bad gear and 1M+ with good gear but it's a minion build so you never know...

Bandits:
Kill All or help Alira for resists.

Pantheon:
Crab dude and whatever minor node you like.

Note there's a fair amount of flexibility in how you build this character. You don't have to strictly follow my endgame PoB, it's just the version of the build that I currently prefer.

This build is created to be pretty well-rounded. It has good clear, great survivability, and really strong single target.At the same time, This build has need a lot of Poe currency, so, You can to Path of Exile buying currency.

The Agony Crawler is a very interesting minion coming from the gem Herald of Agony. It follows you around and has three attacks: one melee attack, which it basically never uses, one projectile attack similar to split arrow, and a barrage of explosive projectiles. It was designed to have decent damage without requiring investment in any minion nodes, so since this build is focused on it and thus takes minion nodes, it yields an amazingly strong and quick little guy.

The Occultist is a very strong and well-rounded ascendancy, which perfectly fits this build for different reasons. This build relies on the Agony Crawler, from Herald of Agony, to deal with the damage.

Since this is a CI build, the two ES ascendancies of the Occultist, Wicked Ward and Vile Bastion, provide a lot of flat ES, ES regeneration while mapping, and most importantly the effect "Your ES recharge cannot be interrupted if it has started recently". With the notable Essence Surge in the skill tree, the quiver Soul Strike, and perhaps a "Faster start of ES recharge while affected by Discipline" Watcher's Eye, the ES recharge can start in less than a second, and then be uninterrupted for 4 seconds - all thanks to the Occultist ascendancy.

This build uses curses, in order to defend ourselves, increase the Crawler's damage, and smooth out its clear, and the Occultist ascendancy is perfect for curses. It provides the ability to curse Hexproof enemies, an extra curse, a lot of curse effect, the debuff Malediction which basically means that cursed enemies deal 10% less damage and take 10% more damage, and finally huge quality of life for clearing, the explosion of cursed enemies, which allows the Crawler to one tap entire packs.

Pros & Cons:
+ Good clear
+ Good single target (Elder, Shaper, and Uber Elder down)
+ Great survivability, with over 10K ES, three curses, and very quick start of ES recharge
+ Cheap to get started - all required uniques are cheap, and ES gear is on average cheaper than their life counterpart
+ Can do all map mods
+ No need to worry about resummoning your minion, he's invulnerable to damage and summons/unsummons itself
+ Fun to play ("It's like a minion build but not boring" ~ Rockwell)
+ Can take everything down up to Shaper without heavy investment (I'd say on a 1 or 2 ex-budget), and can take down Uber Elder with some further investment (a faster start of ES recharge Watcher's Eye is almost mandatory)
+/- It's a minion build, which feels clunky to some people and relaxing to some others
- The Agony Crawler doesn't have a perfect AI, and will sometimes get stuck behind walls, although this can be solved by having a Convocation gem (now that it's instant cast, it's comfortable to use)
- Requires one six-link for HoA, and one for sustaining poison - you can play with a five-link for your poison setup, but you'll only have two curses
- Off-colors can be hard to get on chest (4 green 2 blue)

Ascendancy:
Alternatively, after cruel lab, if you already have good ES gear and want to improve your clear, you can take Profane Bloom before Vile Bastion, but unless you really feel tanky enough already, I would still follow the order in the picture.

Bandits:
Kill them all.
Easy choice: the only bandit worth helping on some builds is Alira, and since we do not profit from the crit multi, the two skill points are what we go for.

Pantheons:
Major gods
My favorite major god. Damage over time is fairly common and is problematic for all ES recharge builds. Reducing it is useful, but having more ES recovery after its end is often life-saving, especially versus Uber Elder where damage over time is everywhere.

Minor gods
The soul of Abberath is almost mandatory. As mentioned before, damage over time is a huge problem since it prevents the start of ES recharge, and ignite is fairly common - there is even a map mod that makes all hits ignite you, and one where the burning ground is everywhere. This God completely negates the effect of burning ground, and halves the duration of all ignite and makes mapping and delving much more comfortable.

1. How does the building work:
- Your Herald of Agony aura summons a crawler that does all the damages.
- In order to gain damage, You will need to stack poison on enemies, doing so will grant Your crawler virulence stack. Your crawler will see Its damage increase for each virulence stack You have up to 40.
- To stack poison You will use Rain of Arrows, it is, in My opinion, the best option as it can hit the same target multiple times with a single attack.
- You will also use Curse on Hit linked to Your Rain of Arrows, that will allow You to apply Your curses on all the enemies You hit with Your Rain of Arrows.
- Thanks to the Occultist Ascendancy cursed enemies will have a chance to explode dealing 25% of their maximum health as chaos damage. That will make big packs of monsters explode and die instantly!

2.Different ways of playing the build:
You can build Your character in 2 different way that doesn't require many changes and can make a huge difference depending on what You want to do with the build.

Mapping Setup: This will allow You to clear maps really quickly, it is also the best setup for Delving.
For this setup, You will want to play 3 courses & Minion Speed.

- You want to use here Projectile Weakness + Temporal Chains + Enfeeble, this is the most defensive version of the build.
- You will also want to get Minion Speed instead of Minion Damage on Your Bow.
- In order to do that You will get +1 curse from the Passive Tree node "Whispers of Doom" and get Temporal Chain or Enfeeble corruption on Your Shaper's Touch.

End Game/Bosses Setup: If Your goal is mainly to kill end game content, Uber Elder, Guardians, Etc..
For this setup, You will want to play 2 courses & Minion Damage.

- You want to use here Projectile Weakness + Poacher's Mark for most of the Bosses like UberElder, Mastermind.
- For Bosses with no adds You can swap Poacher's Mark for Withering Touch.
- You will remove here "Whispers Of Doom" from the Tree and spec into more ES, You can also then try to get Shaper's Touch with +1 Gems Or +2 Aura Gems.

Gems Setup:
- Rain Of Arrows is, in My opinion, the best choice to stack Virulence/Poison as it can hit the same target multiple times with a single attack. Because of that, You can gain multiple Virulence/Poison stack with only one attack.
- Poison Support is mandatory to stack Poison for the crawler.
- Curse On Hit is another mandatory gem here as it will allow Us to apply Projectile Weakness and another curse of Your choice on hit with Our Rain of Arrows.
- Faster Attack as explained in the Bow will allow Us to stack Poison/Virulence faster.
- Projectile Weakness is the curse that You will Always want to have in Your Setup no matter what, as it let the crawler pierce all the affected targets and also make them take increased projectile damage.
- Poacher's Mark grants Our minion Frenzy charges which are about 1 million DPS. If You want a safer approach You can use Enfeeble/Temporal Chains. 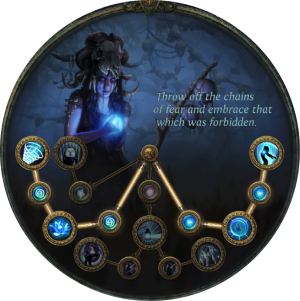