Path of Exile Blight is coming, are you ready?

- August 20, 2019
In Path of Exile, Synthesis league is bad but Legion league is very good I feel. So, players are very concerned about the next season. GGG consistently brings out new leagues that are packed with fresh gameplay mechanics. Now, we already know the Blight league this season, then the new season POE 3.8, will bring us new content and surprises, let's take a look at Eznpc. 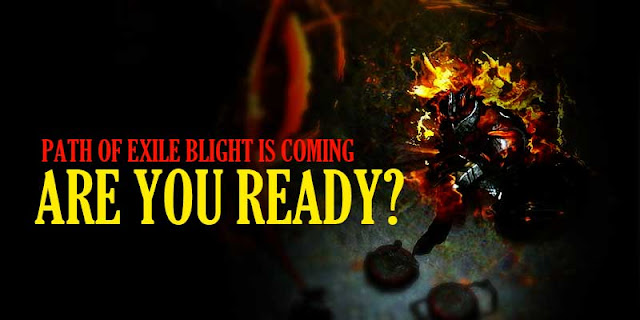 Path of Exile: Blight
In Path of Exile: Blight, you must stop the spread of the deadly Blight by building towers to defend against monsters held in its thrall. Our September expansion contains the Blight challenge league, three revamped balance archetypes with new skills and support gems, plenty of new items, two old leagues being integrated into the core game, and a focus on giving you more freedom to choose which aspects of Path of Exile's content you play and when. 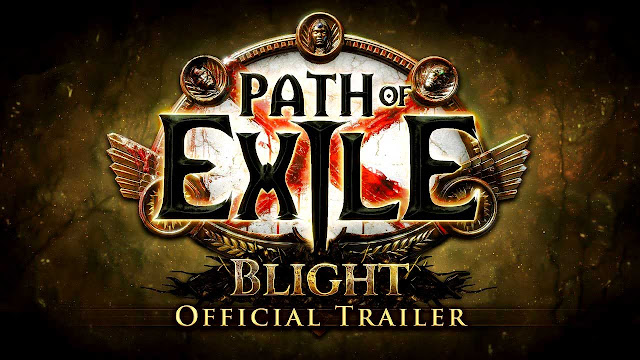 Sister Cassia is trying to stop the spread of the mind-controlling Blight by destroying Fungal Growths. When attacked, the Blight commands infected monsters to defend it. The monsters mindlessly follow the Blight's tendrils, only attacking foes directly in their path. The infected are unusually tough, so you'll need to build defensive towers to exploit each monster's specific weaknesses. For each tendril lane you defend, a chest will appear with your rewards. 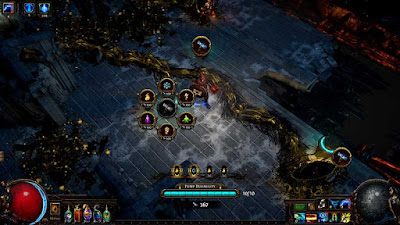 How To Build Your Defense in POE 3.8?

Sister Cassia's arsenal contains towers that Chill, Shock, Stun, Burn, Summon, Empower, Petrify and Debilitate. Choose, place and upgrade these towers carefully to take advantage of both the terrain and the weaknesses of the infected monsters. These fast, bite-sized Tower Defense encounters combine Path of Exile's intense action combat with the tactical fun of this popular genre. 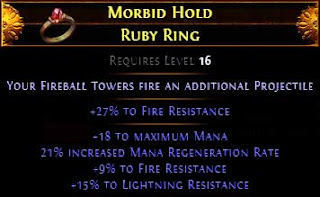 How to Cleanse Blighted Maps in POE 3.8?

Path of Exile's end-game is not safe from the effects of the Blight either. Find Blighted Maps which contain gigantic Blight encounters with dozens of lanes and some of the league's most valuable rewards. 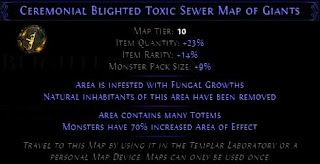 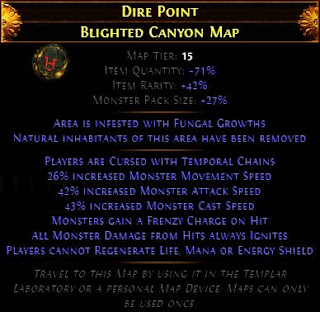 How about Enchant Your Items in POE 3.8?

Among other treasures, the Blight yields Oils which Sister Cassia can use to anoint your jewellery. Combine two Oils to enchant a Ring with a potent tower modifier. Combine three Oils to enchant your Amulet with any Notable Passive Skill from the Skill Tree. The twelve Oils vary considerably in rarity, with each combination of them granting a different result. 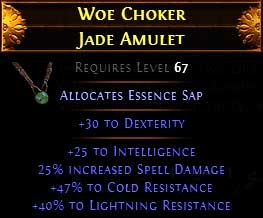 What are Anointable Unique Items in POE 3.8?

Four of the Unique Items exclusive to the Blight league form an armour set that can also be anointed with Notable Passives. Combined with an anointed Amulet, the wearer of this set can have up to five bonus Notable Passives active at once, unlocking countless new build possibilities. 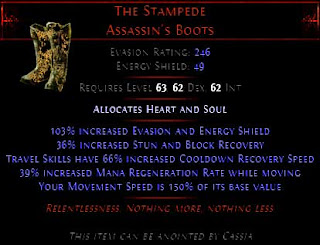 How to Manage Your Master Missions in POE 3.8?

You're no longer forced to run every Master Mission as soon as you encounter it, or required to run arbitrary maps to complete your dailies. Significantly more of your Missions is now earned through map completion and they can be run later by talking to the Master in your hideout. Missions accumulate indefinitely, and you can run them whenever you have time, on whatever maps you choose. We have also improved Betrayal's rewards, made deeper depths easier to access in Delve, and integrated Legion and the boss fights from Synthesis into the core game. 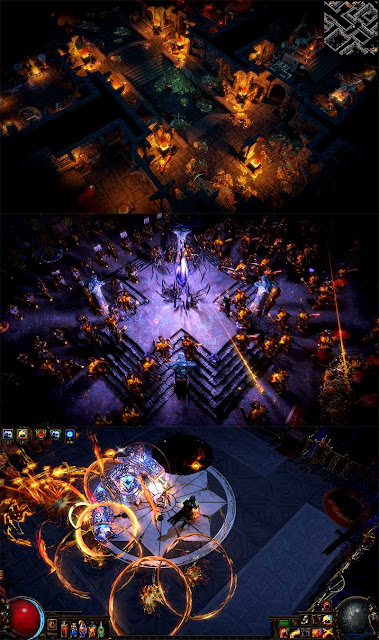 What is The Necromancer Archetype in POE 3.8?

Summoners are one of the most popular playstyles in Action RPGs. In Path of Exile: Blight we have significantly revamped many Summoner mechanics and the Witch's Necromancer Ascendancy Class. We have buffed the per-gem-level progression of many minion types, added new support gems that allow you to fine-tune minion behavior, revamped the Necromancer Ascendancy, introduced the Carrion Golem, added a high-level wand base type that can roll powerful minion mods and have made many other changes. To support all the new skills that are available, we have added an additional bar of skill bindings.

Carrion Golem
A dangerous new golem minion that buffs and if buffed by your non-golem minions. 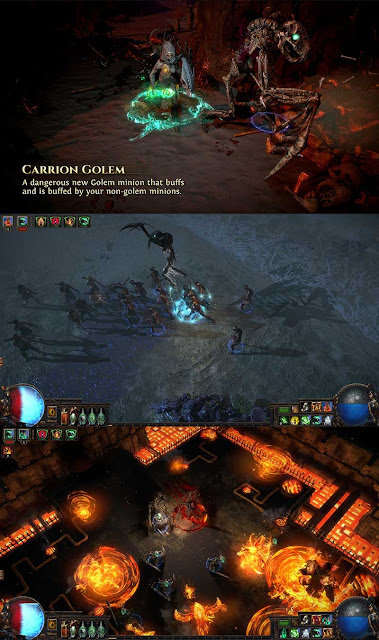 What is The Poison Assassin Archetype in POE 3.8?

The Poison Assassin, once the most dominant play style in Path of Exile, is returning (almost) to its glory days! Blight adds a new poison themed Support Gem and a suite of five potent new poison-themed Skill Gems, including Cobra Lash, which chains a poisoned projectile between your foes. The new Elusive mechanic, supported by a new Ascendancy notable, provides powerful defensive opportunities and a means of escape, while changes to the Perfect Agony Keystone Passive and multipliers for ailments from Critical Hits ensure the Poison Assassin gets his mark.

Withering Step
Use this as a movement skill alongside other skills. Instantly withers enemies around you. 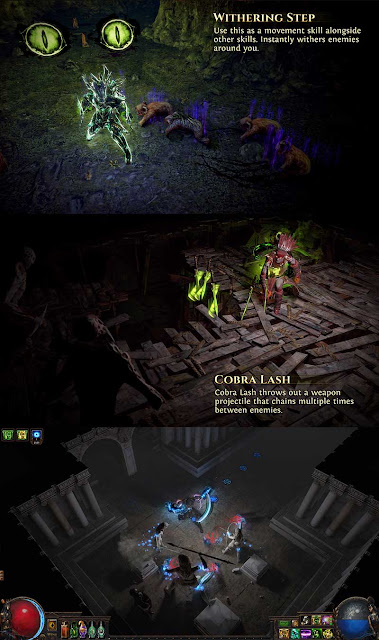 What is The Mine Saboteur Archetype in POE 3.8?

We often received feedback that Mines, though strong, felt clunky to use. In Blight, we have completely reworked my mechanics from the ground up. Thrown to a location rather than placed at your feet, Mines now deploy more quickly and detonate in sequence. Mine skills now also reward you for detonating long sequences. New and reworked Mine Support Gems, as well as the mobile Skitterbots, provide new avenues for explosive power. All these additions are further enhanced by changes to the Passive Skill Tree and the Saboteur Ascendancy Class.

Stormblast Mine
This mine makes nearby enemies vulnerable to damage, with increas ingly powerful shockwaves when multiple are detonated in sequence. 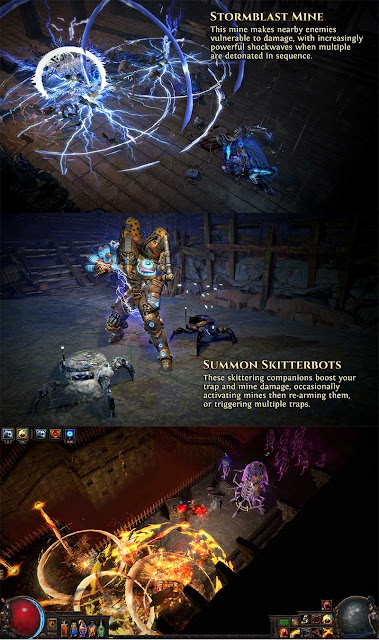 What Powerful New Items have been added in POE 3.8?

Alongside the Oils, Blighted Maps, and new Jewellery Enchantments, Path of Exile: Blight contains 18 new Divination Cards, 16 new Skill and Support Gems, and 16 new Unique Items for you to discover. In addition, we have rebalanced 24 existing Unique Items, of which six have received substantial overhauls. 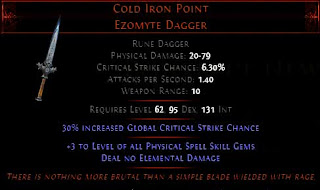 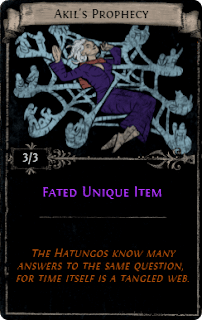 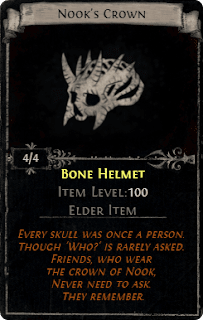 What are the Blight Supporter Packs in POE 3.8?

We're also launching two sets of Supporter Packs alongside Blight - the Lich and Sentinel Packs. There are two price points available for each and they feature masses of points alongside new Armour Sets and other exclusive cosmetic microtransactions! You'll be able to purchase these from Thursday, August 22 (PDT) onwards. Path of Exile: Blight will launch on September 6th (PDT) on PC and September 9 on Xbox One and PlayStation 4.