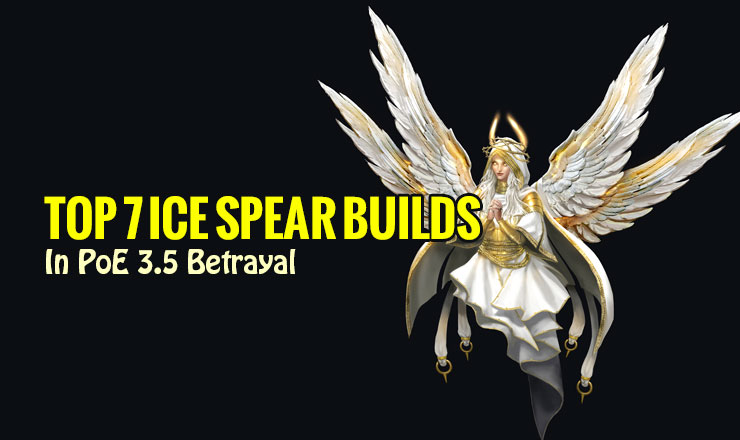 New Ice Spear is strong to one focus on although not map farming. Its fires two Projectile, with terrific crit probability and crit multi, rendering it is powerful to destroy powerful mob. Especially owing to new assistance gem Various Totem Help makes Non-Hierophant character can use 3 totems at just one time. According to POB, my Ice Spear Totem Shaper DPS Entire Buff without the need of Vaal RF and Anger.

This is my take on the Winter Orb + Ice Spear combo. I hope that you'll find the guide helpful.

Main Skill: Winter Orb and Ice Spear
Reason: Both scales off +# project. Winter Orb is good for clearing but sucks for single target, while for Ice Spear is the opposite, so they basically compensate each other.

Ehp pool: Hybrid
Reason: On the tree, we have access to some good Life+ES % nodes. By sacrificing a little bit of dps is possible to take Acro/Phase Acro

Crit vs Ele Overload: Crit
Reason: I think that not going crit with Ice Spear is a waste.

Bandits: Help Alira
Reason: We go crit, so the multi crit damage is good. Mana regen and all res are good too.

Pros & Cons:
+ 9k+ EHP with Fenumus Shroud, 7k+EHP with a tabula!
+ Cheap to start gearing!
+ No gem swapping!
+ End game viable!
+ Can do all map mods!
+ Nice clearspeed!
+ Can handle t16 syndicates easily due to playstyle
- Nonfacetank build
- Not T1 clear speed
- Less DPS than double voids
- Quite a lot of buttons to press

Pantheon:
Major God: Brine king when mapping/early in the atlas, Soul of arakaali for uber elder
Minor God: Soul of Ryslatha when in the lab, Yugul for Uber Elder.

Leveling Guide:
Tabula is the MVP here. Winter Orb clears remarkably well provided it has dps. Winter has pretty shitty single target dps. CwC has a good mix of both but requires a 6l. Tabula is the answer.

But seriously tho, if you're starting from scratch and afford a tabula, start with a +1 cold gems scepter/wand. You can make them yourself by endorsing a white scepter/wand with a sapphire ring to get that cold gem.

Level 1 - 27
Grab freeze pulse and explosive trap to start.
Both deals pretty great damage as a single link and have the great single target as well. Use a +1 gems scepter/wand using a recipe or a dagger if you manage to find one with some nice spell damage.

Level 28 - 45
Once you hit level 28, grab winter orb added cold and lesser multiple projects and socket in a 3l wand/scepter +1 cold gems. Use an offhand with spell damage/crit or flat damage. Basically, anything that boosts your dps. Equip tabula if you have/can afford one at this point. This set up should be able to carry you all the way till Act 5 without much of a problem. Don't facetank and run around in circles when fighting bosses.

Level 45 - 70
Now would the time when you just finished act 5. Grab resists gears, equip that gold rim that you have been holding off for a while and make sure you get resists on rings.
Grab a brine crown once you hit level 63.
Once you clear act 10 you need to upgrade your resistance gear again. Make sure you are capped(except chaos) or you will have a hard time entering maps.

Level 70+
Do not enter maps without a tabula or with uncapped resistance.
Use discipline to increase your EHP pool.
Grab void walkers if you are saving up for a pandemonium.
Upgrade rings and amulet to decent rares

This time I made an indigon Crit Ice spear Totems Hierophant. This really is by far my strongest develop offensively and defensively and it does not even cost that considerably for what it could do. It deletes endgame bosses whilst being really tanky.

Pros & Cons:
+ Insane damage compared to the cost of the build (18ex invested from me)
+ Very high damage against bosses
+ Decent clear speed
+ Very tanky. Do not be fooled by the 4000 life. There is more than 6000 mana with 4000 mana regenerated per second and 60% MoM (damage taken from mana before life).
+ Can do all map mods except No regen
+ All the bosses except Uber Elder are a walkover without any danger.
- It can be hard to fill up all resistances

Leveling Guide:
Level 1: Slap on a Goldrim, a String of servitude with all resistances corruption and all the regular leveling gear. Try to get a Tabula Rasa a +2 projectile gems level. It costs 15-25c and you can resell it later. Use projectile spells like Freezing Pulse, Frostbolt or Magma orb.

Level 10: Put two Axiom Perpetuum.
Level 20: Around that level, you can take the Ancestral Bond keystone. Put the spell totem and Ice spear inside your tabula rasa. Slot a Rain of Splinters jewel.
Level 33: Do the first labyrinth and take the Pursuit of Faith node.
Levels 20-65: Take life, spell crit and multiplier, mana, mana regen on the tree. Look at the final tree and progressively take all the nodes I took from the templar to the shadow.
Level 55: Do the second labyrinth and take the Conviction of Power node for power and endurance charge generation.
Level 65: Time to put a Shimmeron. The degen coming from the Shimmeron is totally absorbed by the 5% life regen coming from the 5 totems and Mind over Matter.
Level 69: This is when the build starts. You can now equip Indigon. This is also the time you put the mana recovery belt, the Watcher’s Eye with mana recovery while having Clarity, the boots with the 2% life and mana regen if you were hit recently enchant. If you have a 5 or 6 linked Cloak of Defiance, it’s also the right time to put it on. Do the third lab at this moment and take Ritual of Awakening.
So the uber labyrinth at around 75. At this point, it should be very easy. Place your totems and run in circles.

Bandits: Kill all. We need all the points we can get.

Pros & Cons:
+ Freeze and Shatter Explosion
+ Distance to enemies
+ Large range of projectiles
+ Minimal effect of curses
+ Concentration on mechanics because the totems do the damage
+ Enemies attack the totems and not you
- Not the fastest build
- Not everyone likes Totem's playing style
- Not the Tankiest Build

Cruel Lab: Ritual of Awakening
Totems are placed 50% faster, 3% more damage per standing totem, Per totem, we regenerate 0.5% mana per second, We automatically place 2 totems, We and our totems regenerate 1% life per second.

Uber Lab: Divine Guidance
150 to Max Mana, 10% of damage is first deducted from Mana instead of life. A small Mind over Matter.

This guide is not for absolute beginners. But it was my starter and budget build. So it works even with almost no gear. Now it is Lv 100 and quite min-maxed. Mapping is very fast, and I killed uber elder deathless aswell.

Pros & Cons:
+ Can be played as a budget/starter.
+ No leeching (except mana).
+ Insanely fast start-up of energy shield recharge.
+ Can Facetank most things in the game even without leech.
+ Herald of Ice explosions.
+ 9k ES
- Can get expensive real fast.
- Addicting.
- Cannot do Ele reflect.
- Cannot do Atziri
- Cannot turn to MF very well.
- Cannot do SSF

Leveling Guide:
I've personally leveled with freeze pulse until around 40-45 level until I got myself a Five-link.
As for the skill tree, you want to take almost all the Cold damage Nodes first. Then the Hybrid Life/ES, the rest of the Ele/Cold nodes, then ES nodes, Crit nodes and Power charges, And a few mana nodes and Dex/Str Nodes If you need them.

Ascendancy:
As for the Ascendanices, you want to take Void Beacon first. Wicked Ward and Vile Bastion next. and Lastly Forbidden Power.

Pantheon:
We want Soul of Arakaali, for reduced damage taken from Damage Over time, (For ignite, cause we are immune to Bleed/Poison.
And then Soul of Abberath for 50% reduced Ignite duration of You. This makes a pretty big difference against fire Bosses. So keep that in mind.

Playstyle:
Is very simple, you charge your Winter orb on a few stacks and run around like a mad lad.
Bossing - For the most part, you just stay in one place, watching a movie on your second monitor and holding your Winter orb button.

That is my initially ever make a guide, so any feedback is hugely appreciated. Ever due to the fact I'd noticed the Winter Orb and Ice Spear reveals, I knew I wanted to play a CwC version of this as my league starter. Luckily for me, it turned out to become actually quite excellent! So I wanted to share this create for people who may be interested.

Updates:
Considering the fact that folks retain asking me stuff ingame rather of reading the thread I will from now on ignore all concerns from direct messages, sorry. Quite certain everything has been stated within this thread, just read by means of it. Added Flask and Jewel sections.Integrated leveling skill trees inside the Skilltree section.

Pros & Cons:
+ Decent mix of clear speed and bossing capability
+ Can start on a very small budget and be upgraded as much as you feel like
+ HOI shatters are always fun
+ Feels decently tanky for a caster
- Can not run elemental reflect mods
- No leech mods can be sketchy on difficult maps
- No ZoomZoom build (no shield charge/whirling blades/QOTF)

Ascendancy:
1. Pendulum of Destruction
2. Shaper of Desolation
3. Beacon of Ruin
4. Mastermind of Discord

You can then slot in Cast While Channeling and Ice Spear as soon as you get a tabula / other 6link, or right away if you already have one. It is in my opinion very pleasant to level with.