- March 10, 2019
Flame Surge is a spell that deals fire damage in the narrow area of effect in front of the caster. It deals more damage against burning enemies. 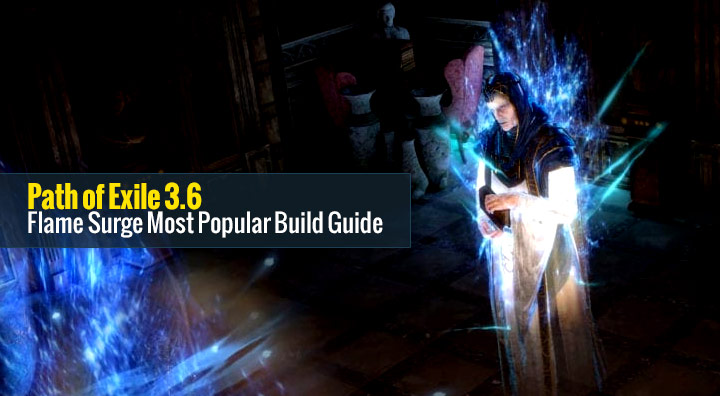 This thread evolved since 3.0 from the original life Flame Surge Build to several builds around Kitava's Thirst, please enjoy.

Pros & Cons:
+ The build is fun. If it's not fun, why bother?
+ Flame Surge: Excellent single target DPS
+ Decent clear speed/AoE
+ Decentsurvivabilityy
+ Active gameplay
+ You get to play a unique build!
+ Gets a buff every patch
- Not recommended if you like mindless farming.
- Can be expensive to work well in the endgame.
- Cannot handle elemental reflect maps.
- Relies heavily on mana, low/no regen is doable, but difficult without Watcher's Eye.
- RNG may/will sometimes be annoying, I wouldn't recommend for HC.
- Decent mobility, but could be better because of the staff.
- Sometimes you can't see shit.

Pantheon:
Lunaris or Solaris, Abberath for ES, Gruthkul/Shakari for Life.

I'm glad to finally show you my COC fire oriented build, which was an idea that merges seeing all those meta-COC-Ice Nova build!

In order to have a high chance to proc this spell correctly, I would need something that hit rapidly enemies: FireStorm / Cyclone. Also, it's been many years I was looking over the Flame Surge spell, and I never found any good build around it, and this spell is perfect for big damage, but it's also very nice for clearspeed once you got enough AOE.

Why Assassin:
Well, it's probably the safest way to play a crit build, when you don't have a high based critical chance weapon, or when you don't play with a +flatcrit chest. Assassin is consistent for any crit build, giving you high single target damage potential, and a really easy way to charge up power charge.

COC Mechanic's:
This gem has to be linked to an attack skill and at least one spell skill (we will use Flame Surge & Fire Storm), casting 6.67 times/sec, till your cyclone have at least 3.34 Attacks/sec. With Fire Burst, that got a 0.5 internal cooldown, you can cast until 8.67 spell/sec

Pros & Cons:
+ Massive Damage
+ Can easily clear Endgame content
+ 7Power Charge / 3 Frenzy charge / 3 Endurance charge
+ Pretty ok survivability
+ Decent Clearspeed till you can proc Fireburst on many big packs with the leap
+ Lvl21 Gem are cheap, you don't need quality on Flame Surge
+ NON-META BUILD <3
+ SO FUN TO PLAY!
- Not a league starter
- The weapon is mandatory and pretty expensive to craft
- CYCLONE <== Can be really bad sometimes (when there is an obstacle)
- Can't really run Elemental reflect map