- March 20, 2019
Essence Drain is a spell that fires a chaos projectile that applies a damage over time debuff when it hits the enemy. The spell also regenerates a portion of the debuff damage as life. If the target dies while afflicted with both Contagion and Essence Drain, the remaining duration of both degeneration effects will be spread to nearby enemies. 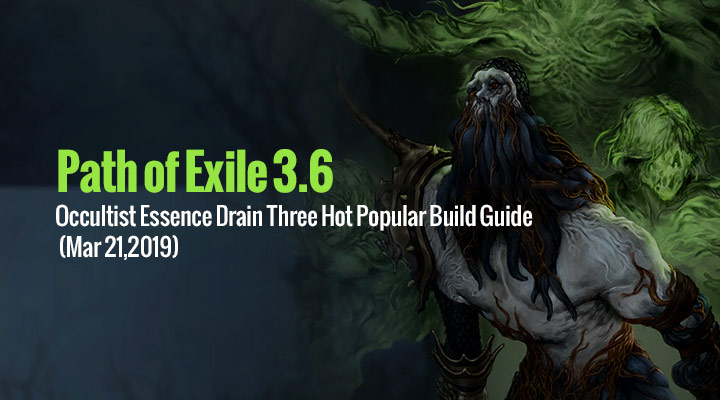 Essence Drain Occultist / Trickster is a well known, solid league starter with countless guides existing! Let's take a DEEPER look into the current state of ED and also find out how well new Synthesis gear and skills like Soulrend / Malevolence / Bane will work together!

We will be using these skills in 3.6 to league start as well as deeper explore different combinations with a well-know Essence Drain + Contagion combo (as Soulrend and ED stacks and count as different sources of DoT).
Over last months I've been checking various sources on current Essence Drain situation as well as tried to squeeze max damage out of it. In this guide, you will (hopefully) find the most comprehensive and detailed information on different ED setups!

Pros & Cons:
+ extremely safe (2-3x defensive Curses, 12K+ ES)
+ easy to league start (can run on Uniques with good sustain)
+ requires only 1 6-Link for end-game
+ all mods, even no mana regen is possible
+ no need for Wither totem (when you get Withering Presence ascendancy passive)
- with ED+Contagion you constantly need to cast 2 skills. If you want to spam just 1 and zoom-zoom, this build might not be for you :)
- Not a fast mapper
- End-Game bossing takes a while
- Not super newbie friendly as you need some knowledge on playing life/hybrid builds and then transition to CI and eventually to Low-Life.

3.6 Updates:
Added PoE gems and PoE Items into the thread as a bonus to my PoB link!
Added a quick gameplay video from early DELVE without DO in SSF

Pros & Cons:
+ Very nice and safe clearspeed thanks to Bane not costing any real mana so you can SPAM this.
+ Thanks to the LARGE AOE you are gonna clear the entire screen in a few clicks, everything that lives the initial hit will melt a few seconds later or get destroyed thanks to Profane Bloom.
+ Death´s Oath while not mandatory is a really nice safe cushion and more dot damage with all other skills combined.
+ Very easy to play with, very easy to gear (All rares totally fine)
- Porcupines, god I hate them.

Bandits:
Help Alira or kill all (Alira gives nice 15% All Resists though) good early on. You can always inspect later if you wish to get more ES

Ascendancy:
Wicked ward > Vile Bastion > Profane Bloom > Malediction.
For sure you can opt for Withering Presence. Feel free to try them out, always can unspec if you don´t like it!

Pantheon:
MAJOR:
Soul of Arkaali with the second Pantheon addon that gives us a huge 50% ES Recovery rate if we stopped taking damage recently!

MINOR:
Soul of Gruthkul - A bit of Physical Damage Reduction
or
Soul of Garukhan - Nice movement speed from the second Pantheon addon and small chance to evade attacks if we´ve taken a savage hit recently.