- March 19, 2019
Summon Skeletons is a spell that summons one allied skeleton Minion per cast. In Path of Exile 3.6 Synthesis, The following two Summon Skeletons Build are the best and most practical ones I think, and I hope to help you. 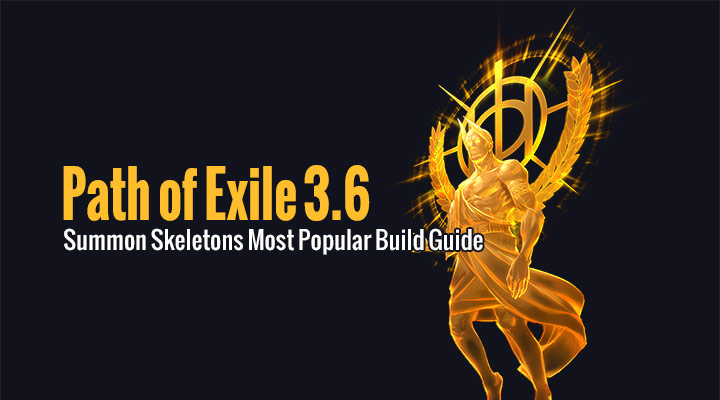 This build in terms of helping with map clearing via slam and survivability as constant meat-shields. Drop Desecrate for Purity of Ice. use Taste of Hate, drop Victario's Charity for Lioneye's Remorse and unspect Necromantic Aegis to get the bonus yourself. Use new skill points to get a couple more jewel sockets for more life.

Use Kaom's Roots.
Spectre and Animated Guardian will still die to degen towards the end of the fight

Pros & Cons:
+ safe across most content. Bosses off screening.
+ high effective HP: can be over 11000+ with MoM or 9000 HP with Lioneye's Remorse. Uber Elder viable.
+ around 70% potential Phys Damage Reduction (Basalt, Taste of Hate, etc)
+ decent regen
+ flexible can stack a lot of block chance if needed
+ great single target damage (around 3.5-4 million with Victario)
+ actually not so slow for mapping
+ much better than Zombies as you don't need corpses to summon, also you don't care if Skeletons die.
- Mediocre clear speed because Skellies are not Spectres. Still faster than Zombies, for the most part.

3.6 Update:
Extremely minor nerf to bone helmets is about the only change that affects the core of this build. An interesting new option that we might want to try is the newly buffed Summon Phantasm Support, which now summons phantasms on the hit against bosses as well as on kill. This means they reliably contribute to single target damage as well as clearing, making them potentially attractive as an addition (probably to zombies rather than skeletons, so as not to weaken skeleton damage).

Pros & Cons:
+ The easiest million DPS build you'll ever make. At level 80, with 18/0 gems, almost literally no gear and no PoB trickery, the build reaches 1.04 million Shaper DPS if every minion hits the same target. See for yourself. You do not have to spend currency, you do not have to be good at the game, you really do not have to do anything special.  All bosses (up to and including Shaper) just melt. You'll get at least 2 million Shaper DPS if you push the build with a few Path of Exile currency, and over double that while Vaal Summon Skeletons is active.
+ Cheap. You can get to read maps very easily on 20 chaos of gear and do all content comfortably on about 2 exes worth of gear.
+ Entirely physical damage, so no issues with high boss elemental resistances.
+ Fast movement thanks to Shield Charge and the huge lump of attack speed granted by the Spiritual Command passive node. You're mostly limited by waiting for your minions to kill things, but clear speed is still above average.
+ Decently tanky. This build doesn't use auras for damage, so we can go Mind over Matter and get about 8k EHP. Of course, you also have an army of minions (22 in the full build) to tank for you, and 10% physical damage reduction courtesy of your zombies.
+ No specters necessary. This build only uses skeletons and zombies, meaning that you don't have to deal with any of the issues specter builds do when it comes to raising the right mobs at the right level. And if something dies, you can just summon it right back. No dramas.
+ Can do all content and all map mods, although Phys reflect is a chore and no regen can be a little dangerous.
+ Surprisingly good at lab running. See note in "Playstyle".
- Clear speed isn't going to be quite as good as screen-clearing specters or golems, especially if you don't have Fear jewelry.
- A couple of bosses just melt your minions instantly and are basically impossible for the build. Atziri trio is the worst offenders.
- Have to level as a different build (SRS) unless you have access to twinking gear.

Pantheon:
Every major god has potential usefulness to the build. However, I would suggest Brine King for the stun resistance. Helps you get out of tight spots. I would also get Lunarius upgraded with "Avoid projectiles that have chained", so you can swap to it for chain maps. For minor gods, Gruthkul provides the most.