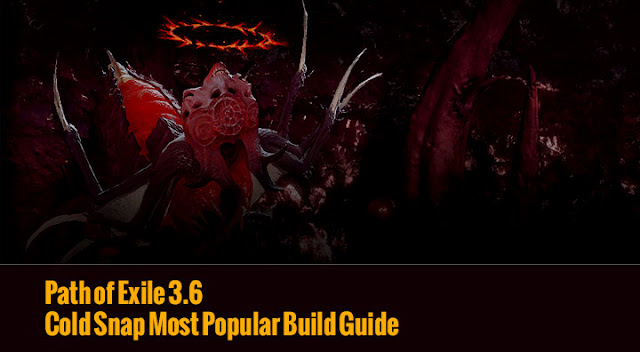 If you ask me, that's no longer a starter build. Still affordable, but early respect is no longer casual+ friendly. If you attempt this build at the start of a league, be prepared to spend a good chunk of time playing a life + MoM spellcaster. Don't worry, though, because that's a good build too.

Gems Setup:
Cold Snap - Efficacy - Elemental Focus - Controlled Destruction - Hypothermia - Empower
Use level 3 Empower until you can afford level 4. 21/20 Cold Snap should be your top priority, with level 4 Empower just behind it. Vaal Cold Snap is great for cosplaying as a Hurricane Druid until you hit that 21/20 Cold Snap.

An alternative option, these gems maximize damage at the cost of AoE and utility:
Cold Snap - Efficacy - Elemental Focus - Controlled Destruction - Concentrated Effect - Empower
On average, this will result in ~120k higher DPS.

This build is very similar to all the other cold DoT Occultists but mine focuses on Cold Snap for clear, and Vortex only for safety and single target. A very safe and easy to play build because it is permanently immune to all chaos damage, stuns, and chill/freeze.
Damage and clear speed are very solid, a great all around build. Can literally do anything in the game. This was my starter build this league and I am going for my first ever level 100 on it.

Pros & Cons:
+ Fast Paced
+ Great Damage
+ Fun to play
+ Almost any cold skill with damage over time works
+ Tons of chill/freezing/shattering
+ Great Boss DPS
- A little squishy until you get to level 80
- Weird playstyle to adjust to
- Can be a little expensive to get end game (Taryn's Shiver + Carcass Jack 5/6Links

When I was playing in public parties I sadly realized that Path of Exile in the current state doesn't really offer content for a cooperative multiplayer game where my supporter would be needed for two reasons:
1) End game boss fights are easier and less confusing when playing solo
2) Mapping is more about running than fighting. Everything is dying instantly so no one needs to deal more damage or CC enemies.

However, playing this character even solo was great fun and it also uses interesting synergies you guys might be interested in. The character was designed mainly for softcore, but with some compromises or adjustments, it can be played in hardcore as well.

Pros & Cons:
+ Very fun to play
+ One-shot most of the enemies with satisfying explosions, including lower tier map bosses
+ Can freeze most bosses and greatly increase damage dealt with them
+ Simple skill effects which don't confuse other players or drastically decrease their client performance
- In my case health only around 4.5K
- Occasionally unreliable when running out of frenzy charges due to nature of Cold Snap skill
- Some uniques can be quite expensive

Vortex and Cold Snap traps - deal massive DOT damage. Should be more consistent boss damage, since you don't have to constantly throw traps to maintain DPS. Having to run for your life in between throwing traps usually means a DPS loss, but not with DOT! You throw 1 of each trap and the damage just ticks away! When the damage dealing ground effects expire, throw your 2 traps again. Use Decoy totem to keep bosses in the DOT effects. Cheap and easy to scale. Easily under 1ex to gear!

Where does our damage come from?
- Stack Cold DOT multiplier with Spine of First Claimant, Rime Gaze, Skill nodes, Jewels with cold DOT.
- Flame Golem in Malachais Artifice ring applies -50 cold reses to anything it hits
- Orb of Storms to easy crit to get 40% more ele dmg.
- Frostbite curse on Blasphemy.
- Arcane Surgeon Flame Dash
- Frenzy Charges from Cold Snap, Master Sapper, Tinkerskin if you can afford it.

Pros & Cons:
+ Safe playstyle, good for new players.
+ DPS never stops while you move to dodge/reposition
+ No unique items required, build works perfectly fine with all rares
+ Scales really well with unique items, which are all cheap! (20c or less each)
+ Can do any map mod! No-regen is kinda rough, but doable if you manage mana flask well.
- You throw single traps, so you have to have decent aim and throw them right onto boss/mobs.
- Lots of buttons to mash for max boss dps

Pantheons:
Major: Soul of the Brine King
- Capture The Forgotten Soldier in Conservatory Map
- Capture Purina, The Challenger in Atoll Map
- Capture Nassar, Lion of the Seas in Reef Map

Minor: Garukhan, Ryslatha or Shakari would all be good
Garukhan
- Capture Stalker of the Endless Dunes in Dig Map
- Evasion and movement speed are great for us

Ryslatha
Capture Gorulis, Will-Thief in Infested Valley Map
- This is a major buff to our instant life flask