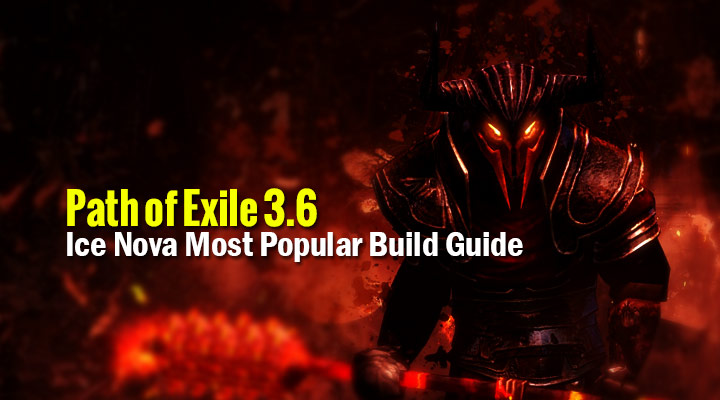 This guide revolves around the reworked Cast On Crit Support Gem. The whole idea of this build isn't new and there seem to be a few videos/guides showcasing this build or similar ones out there, but I wasn't able to find any up to date guide to this exact play style. To fill this gap, I decided to write this guide.

The main mechanic of this build is the updated Cast on Crit Support Gem paired with the Cospris Malice Sword. Go check the Wiki Page of CoC and the Sword now in case you are not yet familiar with them. This Guide originally started as GC+IN CoC build. I removed GC almost fully from the guide tho as it simply can't compete with IN only. The base damage and aoe of IN are just way better...
I will explain how CoC + Cospris work in detail because you will need it to calculate your total damage and to know what actually happens.

Bandits:
Leave Alira alive or pick 2 Skill points, you can get some nice things with those.

Pantheon:
- Soul of Lunaris, as we are cycling into mobs we always have a lot of monsters around us and projectiles are often very dangerous too as they come in your count and not all of them will be evaded/dodged
- Soul of Garukhan, even more, evade chance and movement speed
- Soul of Yugul when running reflect maps

Life Leech PoE Support Gem: swap out warlords mark for enfeebling. That's actually a more tanky way to get your leech. Hexproof maps aren't a problem anymore, but you should get some mana leech nodes in the tree! Do not use this for boss fights like shaper because you do not leech as much damage as with wm with this setup!
Life Leech Support 21/20 - Ice Nova 21/20 - Frost Bolt 21/20

T16 Map with some Betrayal action:

This guide will teach you how to properly handle a CoC (like Vegan) and how to unleash its full potential. So sit back and enjoy as I breakdown every single detail regarding game mechanics, interactions and Minmaxing in this all-in-one build I made for 3.6.

Bandits:
Help Alira. Kill Oak and Kraityn. From this, we get Critical Strike Multiplier, some Elemental Resistances and Mana Regeneration - all of which are very much needed for this build.

Minor God: Gruthkul. More Physical Damage mitigation. Upgrading this god also reduces enemies' Attack Speed when they hit you by 8% (quite a lot!).
Garukhand can be a good alternative for mapping after upgrading it for 6% Movement Speed.
Yugul can also be used against encounters involving Cold Damage such as Elder or Shaper.

Benefits of the CoC
- Lots of Balls
- Easy[gameplay] Breezy beautiful, Cover CoC
- Many ways to trigger CoC[Cyclone isn't the only girthy boy]
- EXPLOSIONS, teehee
- Fast Paced
- Never have to break a barrel again
- All Content Viable
- This bad boy can fit so many life gains on hit[Tank out with your CoC out]
- FPS friendly, surprisingly
- Most importantly Aesthetics

Bandit:
Alira - Feel free to switch to Kill All once you fill out your crit multi-nodes on a tree and have your resists Cap'd through items. The 5 mana regen will hurt but is only a quality of life component.

Minor God: Soul of Gruthkul - Erebix, Light's Bane
Reducing Mobs attack speed by 8% is a huge benefit to dodge/evasion based builds as it makes them hit slower which means fewer hits taken in general. Another substantial defensive boost.

OR
Minor God: Soul of Garukhan - Stalker of the Endless Dunes
This soul is focused on gaining movement speed which helps a for clearing and is a nice quality of life boost for cycling. Every little bit helps. The +5% chance to evade attacks is a flat amount, so say you have a 53% chance to evade you now will have a 58% chance to evade. Pretty good as well.

3.6 Synthesis Patch:
Since patch 3.6 brought many changes/adjustments to spells some will affect this build:
1) The total damage output on bosses is significantly increased, due to the lowered curse immunity of bosses 66% (from 80%)
2) Ice Nova has a slightly reduced damage, but nothing to concern about.
3) Ice Nova has a faster cast time of 0.7 (from 0.8)
4) The crafted mod "x% non-chaos damage as extra chaos damage" is gone/omitted. You may consider crafting "x% of cold damage as extra chaos damage" instead on your multi-crafted staff.

Pros & Cons:
+ insane AoE damage output -> the whole screen explodes and shatters
+ utilizing a build with 4 curses (2 offensive curses + 2 defensive curses)
+ fairly safe to play, because everything gets chilled/frozen
+ do all content in the game (due to "Void Beacon" even HoGM variable)
+ funny, refreshing playstyle
- expensive to min max
- cast Ice Nova onto Frostbolts -> needs a bit of training...
- only Flame Dash as a movement skill
- two 6-links highly recommended
- no ele reflect maps

Pantheon:
1) Soul of Lunaris
2) Soul of Gruthkul
Note: capture all souls with divine vessels -> solid defense buff!
Keep in mind, that it is beneficial to swap the minor god on "Aul, the Crystal King (delve boss) to Yogul.

The basic concept of this build is:
Using CoC+Nova, plus Frostbolt on copper, and other cool things like Arctic Breath and Vortex, to create multiple casts of Ice Nova per trigger! As well as a good use of the 3.5 cold skills new mechanics!

Gems Link:
Kaom's Root is not mandatory for this build (if you're using Cyclone, you don't need it at all!). You can get Dusklight or rare boots, even Atziri's step and Garukhan can do just fine.

Let me explain a bit the mechanics:
First, we got the 6-Linked Carcass Jack (which received a decent buff with the AoE), a typical BF-CoC-IceNova setup. We're using Increased Crit. Chance for more procs, and Hypothermia instead of Elemental Focus because we need the defensives from Chill and Freeze.

The next will be the 3L Cospri: GMP-Frostbolt-Ice Nova
And on another item, Vortex-Bonechill
Here's how it works:
Frostbolt will let Ice Nova cast again, up to 2 Frostbolt duplicating per Ice Nova. Which basically means the Ice Nova will double its damage if there's enough Frostbolt in front of you!
Cospri's Ice Nova can also proc on Frostbolts as well!

Vortex can provide multiple benefits including end-game encounters, you can easily cast it since its an Instant skill! (where you cannot apply chill that easy).

Ascendancy:
Ascendancy can be very flexible. However, I would recommend Assassin for crit chance, power charges and a decent start point from the passive tree.
-For instance, if you don't like Kaom's root and want to take advantage of Pandemonius' blind effect, you can choose Jugg.
-If you'd like more damage and some ailment immunity, take Inquisitor. (my personal choice)
-If you're using Cyclone instead of Blade Flurry, you might want to get the Champion node for fortifying.
-Raider for infinite frenzy charges and onslaught, and even Slayer for the overreach.