- March 22, 2019
Trickster is an Ascendancy class for Shadows. The Trickster is a versatile hybrid class that mixes high speed, maneuverability, and slippery defenses. It is well-suited for Shadows that deal damage over time, including from poison. The following is Trickster three most popular skills for Path of Exile 3.6 Synthesis League, Soulrend/Divine ire/essence Drain, and the main build Guide for these three skills are described below. 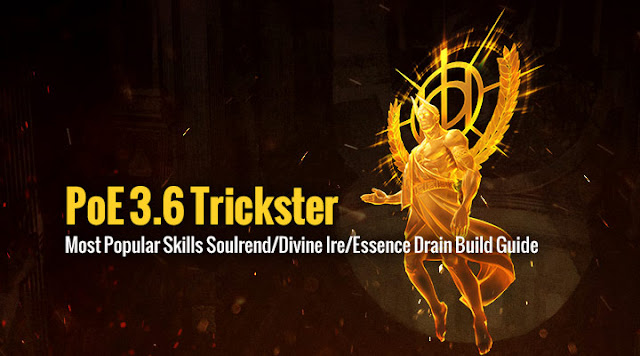 In Path of Exile 3.6 Synthesis, Soulrend is now available for the Scion, Witch, and Shadow after completing Sever, the Right Hand. The new skill Soulrend has an attack time override of 0.4 seconds applied to its Damage over Time. Soulrend: Release a projectile that moves towards and passes through enemies, dealing chaos damage to enemies it hits and leeching a portion of that damage as Energy Shield. This projectile also applies short-duration damage over time effect to enemies around its path.

Divine Ire is now available for the Scion and Templar after completing Sever, the Right Hand. Divine Ire Updated is Deals physical and lightning damage to nearby enemies and grants stages while channeling, granting additional stages based on nearby enemies you damage. When you stop channeling, unleash a powerful beam of energy in front of you, dealing more damage per stage.

Essence Drain is a spell that fires a chaos projectile that applies a damage over time debuff when it hits the enemy. The spell also regenerates a portion of the debuff damage as life. If the target dies while afflicted with both Contagion and Essence Drain, the remaining duration of both degeneration effects will be spread to nearby enemies.

This is the first guide. This does not require anything, can be played SSF and/or the starter. Currently, I am mapping alched/vaaled T12-T14 maps, sometimes T15. I can run all of them without any issues. For the second GIF, I changed my ES belt for a Bisco's Leash, just to see the progress. Maps are T12 and T14 by the way. It was the first time running that map, as you can see on my clearing way.

This is a very very fast and solid build with lots of defensive mechanics, such as dodge (spell + attacks), HP/ES + MOM, leech to HP/ES/Mana and many more (see Trickster ascendancies for example). So probably this is for people who prefer not dying.

Pros & Cons:
+ Fast as fuck
+ Runs with cheap/SSF gear
+ Excellent map clear
+ Excellent boss damage
+ Can run any map mod
+ Defensive mechanics
+ Doesn't get boring as you are using several skills
+ All map mods besides cannot regen
- Requires you to use skills and flasks frequently to make use of all the potential. Not everyone style.
- As any other caster in the game, this is not meant to facetank boss slams
- You need to stop casting Soulrend or any other skill.
- Not a melee chad warrior of death and destruction
- Wtb devouring diadem

Bandits:
Kill all, or go allira for first resists and then switch to kill all later.

Pantheon:
major: the soul of Arakalli
minor: Shakira.
Make sure to buy divine vessels and upgrade them!

Skill Gems:
Soulrend - Efficacy, Void manip, Controlled, GMP, I have seen/heard increased duration, empower, or swift affliction for here. Level up all 3 and try them out, it's up to you/what you are doing!
You could swap out GMP for one of the others for boss fights, but it's probably fine, fuck it.

This build uses the excellent Dusk-dawn staff to abuse chaos conversion mechanics and allows for millions of damage from a single nasty beam of death. And with max block, ghost shrouds, and a solid life pool we're also reasonably tanky to boot!

This build does NOT require a lot of investment to become strong. By day 3 of Synthesis, I'm at 1.6m dps on Shaper after ~3ex of investment (first league spending). And most of my investment is for hp (Kaoms), not dps. Red maps are a breeze, and everything is either frozen or dies too quickly to matter. You can reach 1m+ dps just fine with a tabula and a Dusk-dawn which, as of my writing right now, is ~3.5ex. There is, however, a lot of clicking required as you barely need to charge the beam to kill packs, so be prepared.

Pros & Cons:
+ Immune to stun if you have shrouds.
+ A lot of attacks and cast speed for smooth clearing.
+ EB lets us reserve all our mana
+ Big hits that will end up shocking big bosses
+ High crit chance and plenty of crit multi from tree
+ 4 frenzy & power charges always w/ Swift Killer
+ Plenty of cast speed from trickster to charge up faster
+ Wither totem to take advantage of chaos damage
+ Aesthetics of a new skill.
- Can't do ele reflect
- Channeling forces you to stand still and be a punching bag sometimes
-Reliant on flasks for a lot of DPS
-Little leech besides Atziri's Promise, may need to port out of some tough fights
-Pretty squishy before Kaom's
-Dusk-dawn is expensive

This build is designed for general map clearing & to be an excellent league-starter build. However, if you are looking to kill end-game bosses this build CAN do them, but will require investment and even at that point there are a lot of other builds that would work better than this. You can always switch around as the guide will go into from a 1H/Shield approach to a +2/+3 PoE Chaos Gem LvL staff which makes it able to farm bosses easier, but as mentioned; Other builds will be stronger for that purpose.
Another really strong option for high-end-game availability is to use the Indigo helmet which will significantly increase your characters dmg output and available end-game content.

Pros & Cons:
+ Runs with cheap/SSF gear
+ Excellent map clear
+ Excellent boss damage
+ Can run any map mod
+ Defensive mechanics
+ Doesn't get boring as you are using several skills
- Requires you to use skills and flasks frequently to make use of all the potential. Not everyone's style.
- As any other caster in the game, this is not meant to facetank boss slams
- You need to stop casting Soulrend or any other skill.

Bandits:
Kill them all or save Alira. It comes down to a matter of taste.

Minor God:
- Soul of Ryslatha
Basically, just an additional layer of defense when you're on low life.