- March 09, 2019
Blood Rage applies a buff that deals physical damage to the player over time while increasing attack speed and life leech. Killing an enemy while this buff is active refreshes the buff duration, and has a chance to grant a frenzy charge. 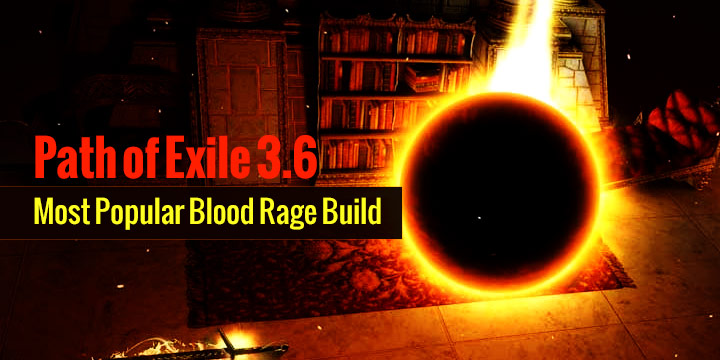 3.6 has yet again brought new content and a rework on the skill tree. Not too much has been changed, but there has been some that apply to this build. I used this as league starter this time and had to rework and made some changes for that simple fact. I did try to get to using Blood Magic as early as possible with some help of fairly easy to get items. But for the most part, this build hasn't changed all that much, mostly all minor things.

Pros & Cons:
+ Pretty quick at clearing
+ Your totems feed you life
+ Has done all maps through T15
+ Atziri
+ Uber Lab
- Like other totem builds, the movement is your main defense
- Gear can get pricey, but it can on pretty much any build
- This is not a flash around the map build using your movement skill's, you run from one group to the next for the most part

Movement Skill and Culling- Flame Dash, Faster Casting, Culling Strike (picked this set up from another player, after learning that even though you cannot inflict damage yourself the culling still procs from the fire on the ground, thus allowing you to cull with Flame Dash.)

Let me start by saying that this build is quite versatile. It is possible to go non Blood Rage, champion instead of deadeye, the tree is also quite modifiable.

Pros & Cons:
+ cheap to start
+ high clear speed, can't clear 1+ screens but super fast movement
+ can shotgun single target which means following in my setup that fires 10 projectiles:
+ 30 life gain on hit base from ascendancy = 300 life gain per skill use, with around 5 attacks per second feels like an old Vaal pact,
+ Impale massacre + each hit has 62 (72 if the banner is planted with 50 stages) percent chance to impale and since projectiles fire in sequence, it means that if 1st projectile applies to impale effect, the next 5 will proc the damage in addition to having a chance applying another impale effect. That means in average 7/10 impale effects from one swing of a weapon, which are boosted from base 10% of damage to 15+ with banner and quality on Shattering Steel
+ Fast gain of the banner stack on a single target. Dread Banner gains stacks for each enemy impaled with a cap of 5 per second, Shattering Steel reaches this cap easily on a single target which means you can have fully stacked banned after 10 seconds on a fight like Uber Elder.
- to achieve max single target you are required to stand on a targets face ensuring that all projectiles are hitting him
- fortification encounter door is the pain in the ass if you are to close you deal no damage (don't know why) but if you move too far away the only portion of projectiles hit and doors are tough :)
- setup with Beltimbers requires you to use movement skill every 4 seconds, doesn't bother me at all, but some people might not like it
- can't run Phys reflect maps

Bandits:
Killing all is probably the best, but I'm stuck with Alira because I don't want to change a lot of gear to cap my resses. You also go Oak if you really want. 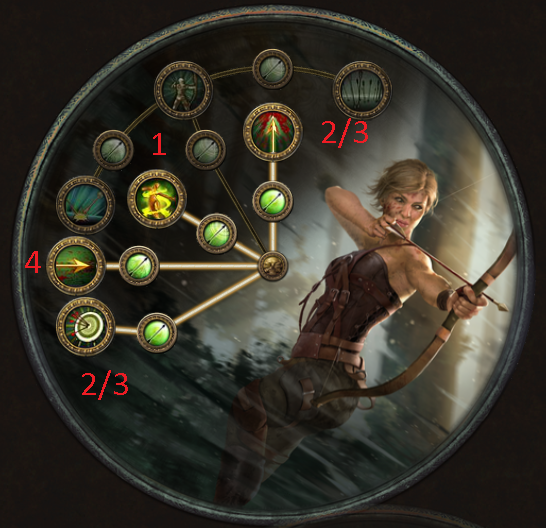 First, you want to take Tailwind, you always take Tailwind on a Deadeye, it's that good.
Uber is when you take Fast and Deadly, at this level your accuracy should be dropping to ~90% so doubling it will probably bring it to 95%

If you have a chest with supported by level 1 maim you add Slower Projectiles support.
If you don't have Pierce nodes from ascendancy you run with Pierce support instead of Vicious Projectiles

This build uses the newly revamped Holy Flame trying to use all his parts to the maximum using blood magic for the mana, Soul Mantle for the curses and extra totem and damage , Dual wield for the projectile speed and movement skills cooldown recovery and crit to synergize with the consecrated ground detailed explanation in the spoiler below.

Pros & Cons:
+ Reflect immune can do all mods.
+ Cheap to start
+ Don´t have to worry about mana at all
+ Semi immune to curses
+ Blood Magic Chieftain dual wielding wands hipster factor
+ A lot of room to grow
+ Easy 100% Conversion to fire
+ Very Tanky 225% Increased Life and totem leech
- You are not completely immune to curses
- You can only use 1 aura
- Is not the highest possible damage version
- Blood Magic Chieftain dual wielding wands hipster facto

This is the latest evolution of my Icestorm builds based on The Whispering Ice unique staff. The main idea is to be super tanky and faceroll everything in your way without having to dodge almost anything. No boss is too hard, most are too easy. All maps with most any mods are a joke. I've been using this build to do 40/40 challenges on my own merit in many leagues, this is my go-to build to get things done. This version was inspired by the new skills introduced in 3.6 and the buffs to Occultist. It uses Cold damage, heavy chill effects, and energy shield leech.

The link CWDT - Blood Rage - Immortal Call is used with Arakaali pantheon to greatly increase the leech power and survivability against bosses, deep delves, the Syndicate, etc. as well as increase clear speed.

Bandits:
Kill them all
None of the bandit rewards are worth 2 skill points for this build.

Pantheon:
Major:
a) Arakaali + Queen of the Great Tangle
50% increased ES recovery is awesome for tanking. 3 frenzy charges are good for clear speed.
b) Solaris (fully upgraded)
A solid defensive choice if you are not using Blood Rage.

Minor: Tukohama, Yugul, Gruthkul
Yugul is for the top cold-based bosses (Hydra, Shaper, Elder, Uber Elder, Aul) and elemental reflect maps. Tukohama for facetanking hard hitters (such as the Syndicate). Or Gruthkul if you like it better (works well in the Delves). Upgrade them all.