- January 03, 2019
Betrayal is among the largest sub-expansions to be released for Path of Exile in recent time. Betrayal is going to be known as the "Arc Mine" league since greater than 20% of all creatures are Arc primarily based, along with the majority of those builds are Mines. Not because Arc received a buff or adjust from 3.5 but because it didn't obtain a nerf, and is capable of handling all the new content. However, the new Winter Orb and Brand expertise are many of the strongest and most enjoyable also, bringing new play designs to the game.

Arc Mines would be the leading construct this league simply because of its capability to dominate all content, clear maps promptly and melt bosses together with the Spire trap. The only downside is the "style" of play can be clunky for many, requiring the player to drop mine and detonate it manually. Second to Arc Mines is Arc Traps, practically as potent as mines, it may clear using the finest and is great in bossing. The third most common Arc build is Arc Totems; although it's not practical as potent for completing all game content, it's a lot more laid back play style that doesn't require constant detonation. 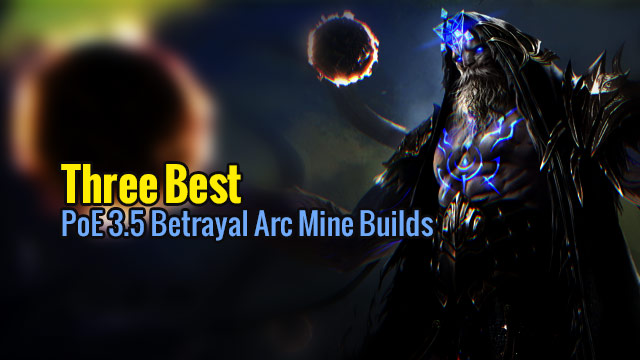 
Pros:
- More than 7.5k Successful hp with Thoughts More than Matter
- Can do any map mod within the game
- Charges less than 30c to play
- Very straightforward leveling
- Explore the Entire screen
- Acrobatics and Phase Acrobatics
- Can tackle all content material
- High Dmg output

Cons:
-Has quick map clear but not the quickest: B+ tier
-Allies can not die auras are annoying


Pros:
+ Pretty cheap
+ Fantastic map clear
+ Tanky (Evasion/Dodge/Block/MoM/Blind/High regen from Sab nodes + Tinkerskin armour)
+ Immune to Ignite and Shock
+ Can do the majority of map mods (the only exception is No Life Regen mod. It really is tough but nonetheless attainable to be done.)

Cons:
- Making use of Flame Dash will not be the most beneficial movement ability.
- Some endgame things might be incredibly high priced cause Arc is so hyped

Pros:
+ Cheap
+ SSF viable bring about no expected uniques
+ A lot of solutions to push this build into endgame
+ Save (bring about totems and mom)