Noodle back at it again using a creepy new build! Downed Uber Elder with relative ease, videos to come. Spiders will actually consume all your enemies alive before you and all you gotta do is run in circles until they are carried out.

Pros & Cons:
+ Super easy mechanics
+ Stupid DPS
+ Watching spiders devour enemies with their tiny little skittery legs is very satisfied
+ Live out your goth fantasy
- Spider summons can go poorly and leave you with not enough spiders, wasting a Portal or leaving you hanging
- Sometimes spiders run away with you instead of aggroing
- Cost of dagger itself is a relatively high investment to start
- Can't use other minions because they'll steal your kills for spider summon 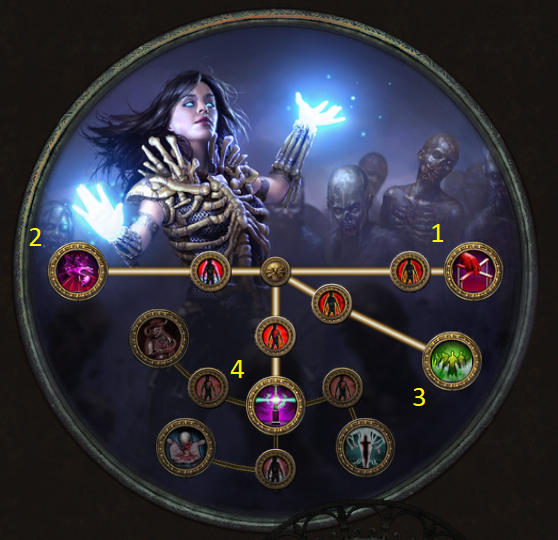 1. Puppet Mistress: gives us increased minion duration, movement, attack speed, damage. All around BAE.
2. Commander of Darkness: Since we will be using Haste and Hatred, we get the sweet damage/defense bonus of Commander of Darkness. Till then you can use Clarity to still get this awesome bonus. +20 allele resist is awesome.
3. Mistress of Sacrifice: In my version, we don't use offerings as much (just in CWDT) but we do use Devouring Diadem to consume corpses every five seconds, giving us 40% inc damage and inc attack/cast speed. Also, skill effect duration is great.
4. Invoker: Honestly unnecessary but the damage boost and convocation cooldown are cool.

Pantheon:
Soul of the Brine King (chill and stun) and Minor: Soul of Ryslatha (more chances for worm flask refill)

Jewels:
Ghastly Eye Jewels are the only Jewels you will need, besides potentially Careful Planning to get some dexterity conversion if you can't get enough on gear.
Here are the most important mods on jewels (in rough order):
1. Flat Life (for us, not minions; minion life doesn't affect)
2. Flat minion Phys damage
3. Attack speed for minions
4. % damage increase using minion skill
5. Flat minion chaos damage
6. % chance to the blind on hit w/ minion attacks
7. Other flat minion damage
8. Minion movement speed

This makes for patch 3.5. Followed Zizaran for most the early part of the season with this construct then started to branch off a bit. These builds are budget, but this one spent a little more time on and decided to multi mod my primary weapon. It is not necessary and will give more detail in other parts of the creation.

Ascendancy:
1. Shaper of Desolation
2. Beacon of Ruin
3. Pendulum of Destruction
4. Mastermind of Discord

Reasons:
Beacon of Ruin is one of the best Ascendancies in the game right now, makes everything die at once, rush it ASAP.
The mastermind of Discord makes it so you can have all elemental heralds on.

While there are currently some great guides available, some still doubt the potential of the skill.

Pros & Cons:
+ Great and Cheap league starter
+ Still scales with more investment
+ Fast map clear
+ Very safe to use due to the mechanics of Winter Orb
+ Very versatile when it comes to making choices
+ Hardcore viable due to Mind over Matter and the ability to freeze enemies
+ Herald of Ice 'Splosions are extremely satisfying
- Winter Orb targets randomly which can be a pain to deal with
- Uber Atziri is very frustrating with this create unless picking up the Paragon of Calamity ascendency
- Can't handle Elemental Reflect and struggles a bit with Elemental Resistance map mods

Ascendancy:
The mastermind of Discord and Beacon of Ruin. It's also important to note that you can respec towards Paragon of Calamity if you intend on doing Uber Atziri. This will make you immune to Elemental Reflect. It's not ideal, but it does make the fight a lot less frustrating. I wouldn't advise farming Atziri without it.

Bandits: Kill all for the two passive points.

There are a few things of note here. First off, it's not easy early on to get a ring with Warlord's Mark on hit. What I did until I got one was replace the Vortex or Increased Duration within the Cast When Damage Taken setup with the curse gem Warlord's Mark. You can also use Herald of Thunder and link it with Warlord's Mark. This works surprisingly well and I've used it on my first few Uber Elder kills!

It's also important that you watch some of the gem levels. My Arcane Surge is at level 6 because that's exactly the level you need for it to proc after two uses of a level 20 Phase Run. The same is true when using Cast When Damage Taken and Immortal Call. You ideally want them to proc often and thus be low level. So make sure you don't overlevel your Warlord's Mark if you decide to slot them together.

Pantheon:
Soul of the Brine King for mapping and the twice upgradedSoul of Lunaris for Uber Elder. My minor Pantheon is Soul of Ryslatha.